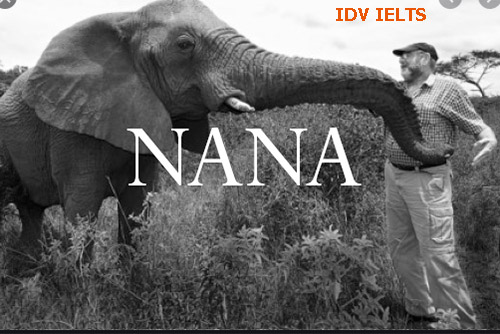 As a nature lover, I watch and read a lot about trees and animals on a regular basis. The other day, I came across a touching story of an extraordinary elephant called Nana, who came to mourn the death of its life saver, an African conservationist named Anthony. I almost cried when I saw a picture of her standing in sorrow outside his home.

Initially, Nana was the mischievous leader of 7 other elephants which were categorised as violent and unruly. They would escape from every enclosure they had been in. If Anthony refused to open the gate of his reserve and give them a home, they would be killed by local authority. Obviously, the elephants had gone through a tough time and were all scared and yet they were looking after one another. Anthony was their only chance of survival. He agreed to let them in, fed them and treated them like children, trying to persuade them that they shouldn’t misbehave. Nana was his focus of attention. One day, the conservationist tried to plead Nana not to break down a fence and to his surprise, she put her trunk through the fence for him to touch. That was a turning point. The elephants began to accept Anthony as a member of their family. They became so close that when Anthony died of a heart attack, the herd travelled over twelve hours from a different part of the park to mourn him. They have kept the habit of returning to his house on that same day every year for a grieving ritual since then.

The story of Nana has touched millions of hearts around the world. It taught us about love, the significance of protecting animals and how we could establish a meaningful  emotional bond with nature.