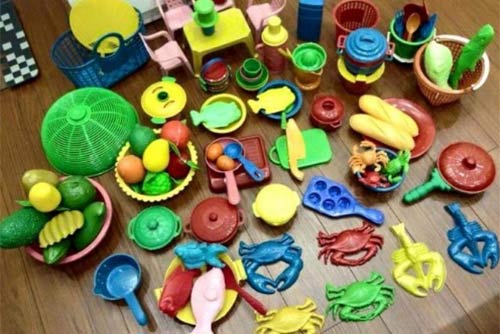 Oh yes. In the countryside, we used to make our own toys rather than buying them. Teddy bears and legos were totally out of the question when I was little. Luckily we had an abundance of resources to create toys. There was a large garden in my house, where we used to gather and have fun. Our toys were made from leaves, branches, flowers, soil, gravels and clam shells; all were natural.

There is a wide variety of toys for kids in Vietnam now. Most of the items are copied versions of popular toys in western countries, including teddy bears, dolls, mini cars and mini instruments like guitars and pianos. Traditional toys can be found in rural areas only and sadly, they are gradually disappearing.

As I mentioned, traditional self-made toys have almost become a thing of the past now. They have been replaced by western-style toys due to globalisation. Thanks to improved living conditions, most parents are now able to afford commercial toys for their kids, even expensive imported pieces from the US or Europe. Toys and games that used to be popular in the past such as bamboo jacks and spin tops seem hard to find now.

Well, it’s true that these days, parents tend to be occupied with work and as a result spend less time with their kids. Buying a lot of toys is considered a convenient way to make up for that lost time. However, I believe nothing can replace actual care, love and intimacy. Children may become distant from parents and suffer from critical mental conditions such as loneliness, depression and anxiety.

Well, first parents need to make sure the item is appropriate for their children. It should be relevant to their age and personal interest. Second, it must offer a bunch of values. I mean their kids should be able to learn something from it in addition to having fun. And last but not least important, it must be safe with no toxic chemicals or potential hazards involved.

The most significant benefit is having fun obviously. A carefree and happy childhood has a ton of positive impacts on children’s life as they tend to become more optimistic and confident. Apart from this, playing with toys helps them acquire essential life skills such as self-control, creativity, teamwork, analytical thinking and problem solving.

Definitely not. The way I see it, boys tend to like male-type toys such as trucks, cars, weapons, superheroes and construction toys while girls prefer Barbie dolls and cooking pots. This is partly due to gender stereotype displayed in toy advertisements and in part because of innate gender differences. They do, however, have one type of toy in common, the teddy bears.

Sure, most children are faced with peer pressure and even are vulnerable to it. They tend to urge their parents to buy them the same toys other kids have. This is possibly because they want to be liked or simply because they worry that other children may make fun of them for not having a certain item. The idea of “everyone else has it or is doing it” can be extremely powerful and teaching kids how to handle peer pressure effectively might be a tough job for parents.