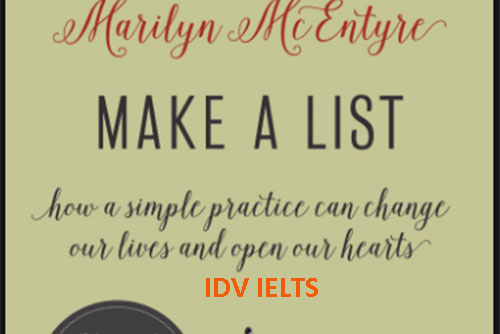 Do you often make a list? (Oh yes, I do so quite regularly. This is mainly because I probably have a goldfish brain. I used to forget a handful of tasks that need to get done every single day. They just slipped my mind. Or when I went on a holiday, I would usually find out several items  missing when unpacking my suitcase simply because I had left them at home. Since I learnt to make list, my memory has improved dramatically.

Do you often do so on paper or on your mobile phone? (Cấu trúc PREFER: for day in day out trivial stuffs or personal engagements such as birthday parties =>   usually make a list via an app on my phone => super handy and more accessible. HOWEVER, when I need to list my long-term plans for work/ study => prefer to write them down / This way, I can stick them on the wall to remind me every day of the most crucial commitments I’ve made)

Do you make a list before you go shopping?  (Cấu trúc DEPENDS + HOWEVER: mua ít, mua nhiều thứ: Well, I would say that it depends really. If I drop by a convenience store to get one or two items for urgent needs, of course making a list in advance would appear irrelevant. However, when I have to collect a whole lot of stuffs, ranging from groceries to detergents, it would be  unimmaginable to do so without a comprehensive list)

Do you make a list for your work? (Does it work?)  (Cấu trúc On top of that: I do. As I mentioned, I always make a list of professional goals I’d like to accomplish for another 2, 3 or 5 years. On top of that, I also create a to-do list on a daily basis. This have done wonder for me and I’ve become sort of more organised and productive.

Why do you think some people don’t want to make lists? (Cấu trúc Why ): Of course, there could be several possible reasons why some don’t care about making lists. Perhaps, they  believe they have a reliable memory and thus making lists might just be a waste of time for them. Another reason could be that they could have created some lists before and found them useless. Anyway, what’s the point of making lists if they would never stick to them.