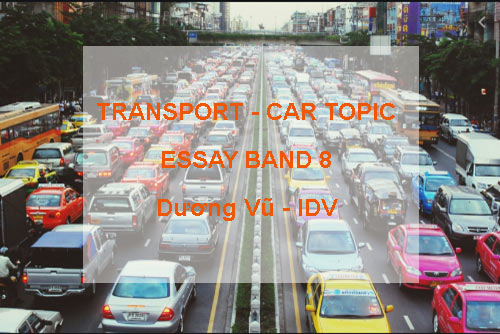 People think that the best method to solve environmental problems is for the government to increase the cost of fuel for cars and other vehicles . To what extent do you agree or disagree?

In recent years, there has been mounting concern over severe pollution caused by the transport sector. Some people argue that to address environmental issues, it is imperative for governments to raise the price of fuel for cars and other vehicles. I disagree with this statement because I believe this measure would be impractical and other realisable solutions should be taken instead.

The first reason why I am against such a short-sighted plan is that it could have far-reaching repercussions on the economy and people’s lives. From economic perspective, while a higher price of fuel is likely to reduce the number of cars on the road slightly, it can trigger a global recession. When transportation cost of raw materials and finished goods rises, production cost will inevitably surge, resulting in reduced profit. If the situation persists, a vast number of manufacturers might have no choice but to downsize or even close their business. Individuals would also suffer the consequences of cost escalation. Particularly, vulnerable people in poverty-stricken communities might find it harder to afford even their fundamental needs. It is, therefore, unjustifiable to raise prices of petrol or diesel fuel without taking these profound implications into consideration first.

Furthermore, I strongly believe that there are feasible solutions which can successfully mitigate unsustainable transport without hurting the economy and society at large. The most crucial measure is for governments to invest substantially on public transport improvement and renewable energy production. When people take the bus and train more often or shift to eco-friendly vehicles running on sustainable energy, their ecological footprints would be significantly lower. This can be seen in Japan and Switzerland where advanced metro and subway systems have been widely-used by the majority of their citizens, resulting in their surprisingly low level of pollution. Another potential remedy is to establish car-free zones or set higher parking fees in major cities. This might discourage unnecessary driving and encourage people to walk or cycle more, meaning that toxic emissions from vehicles would be effectively mitigated.

In conclusion, it seems that setting a higher price for vehicles’ fuel to tackle environmental challenges is unjustified, both economically and socially. In my view, other attainable remedies involving public transport advancement and car restriction should be implemented instead. (368 words, band 8)